On Friday last Sir John Palgrave moved slowly in his seat. He had been happily contemplating a fine meal recently consumed only to be disturbed gentleman of his staff advising that his old enemy, the redoubtable Royalist Lord Sutton, was almost upon him. Sutton it seemed, had stolen a march on him and would soon be on the field of battle. Sir John ordered his horse and motioned to the door of the tavern. Turning to Sir Robert Dales, his trusted subordinate, he gave encouraging words. “Take solace sir as we shall before this day is out have given a good accounte of ourselves, and will, with gods blessing, slight the Papists that are converging from divers places upon us. With our pikes we will stand strong and our will musketts speak with righteous form”.

Soon after departing the Wild Swan, a fine ale house if ever there was one, Sir John sat comfortably upon his horse viewing his army deployed in all its splendour on the fields west of the small village of Ashingdon. Towards the centre of his line a gentle hill provided an excellent observation point and one on which he was now positioned. Further forward and to the left another hill separated his line from the enemy right. Sir John had at his disposal some four regiments of foote each of 600 men. They were from left to right those of Gabriel Holmes, Edward Meredith, Vincent Boyce and finally Francis Barns. These were supported ten troops of horse mostly harquebusiers save two troops of gentlemen in full armour and a company of dragoons. The horse were deployed to the rear in near equal parts betwixt the left and right flanks except a reserve of lobsters around his own body in the centre. The army was further supported by several gunnes. Of these the larger gunnes, being mostly sakers, were on the centre and the lighter pieces further to the left.

In the distance the Royalists had by now deployed. The Royalist left contained mostly foote deployed in two regiments with the pike drawn up in deep formations supported by sleeves of shotte. Each regiment comprised 800 men, but with one muskett to each pikemen, the whole supported by a number of light gunnes. Extending to the right the Royalist line comprised several sakers and a body of commanded shotte who numbered 700 men. Finally, the Royalist horse were drawn up on the extreme right some seven troops, constrained somewhat at least initially, by several small woods.

Above, a portion of the Royalist line. Below, a view of the Parliament line with Francis Barns’ Regiment on the left, Vincent Boyce’s Regiment and on the left Edward Meredith’s green coats.

Below, a general view illustrating the deployments of both armies with the Roundheads on the left and Royalists on the right.

It was near 3pm when the engagement got underway. As the wind cut across the field the standards of both armies flapped in the breeze and with the beat of drum the Royalist foote began their advance. Likewise on the Royalist right the horse moved forward freeing themselves from the confining terrain and expanding to overlap Roundhead left flank.

The Royalist advance against the Roundhead right was met with a deafening retort from the Roundhead sakers that now sent a series of well aimed cannon shot into the Royalist ranks causing much discomfort.

Yet, the Royalist foote did continue to advance until coming within muskett range when the foote did exchange fire. The Parliamentarian right flank, under the command of Sir Robert Dales, outflanked the Royalist line. As the regiments of Vincent Boyce and Francis Barns engaged the oncoming enemy a company of dragoons was dispatched to the extreme left and poured further fire on to the extreme Royalist left. Such was the discomfort clearly caused upon the enemy that Sir Robert soon ordered four troops of his harquebusiers also to the flank, hoping to turn the situation to his advantage at the earliest. 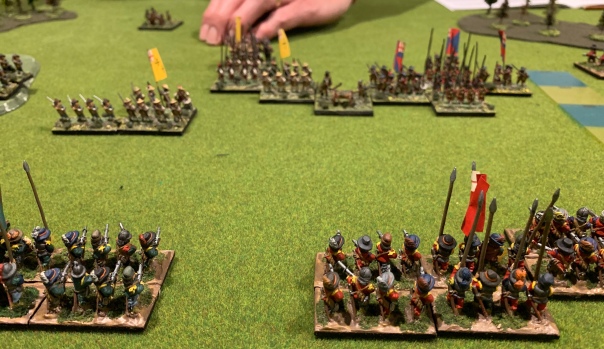 However, on Parliamentarian left flank the situation looked bleak. A party of Royalist dragoons under Captain Constantine Lister, formerly of the Skipton Castle garrison, had secured the gentle rise in front of the Parliamentarian lines and as a result Gabriel Holmes regiment of foot looked set to be outflanked by Royalist horse and engaged by the Royalist commanded shot. A dire situation indeed.

Sir John Palgrave therefore ordered four troops of horse to advance against the dragoons and then having scattered the dragoons engage the advancing enemy foot. The latter were to suffer a bloody nose at the hands of the Parliamentarian horse as they broke into the Royalist foote who were unable to withstand a determined charge. Yet, as Major Thomas Wild’s horse fell upon the Royalist dragoons the first of the Royalist horse charged Holmes’ regiment.

Holmes later wrote that “Neither musketters nor pikemen alone can be singly sufficent to withstand the able and resolute horsemen. Yet when musketts and pikes being conjoined in one body and being well ordered they are not only able to defend themselves against the fury, but also to put them to the worst”. The first line of Royalist horse was dispatched with bloody vengeance.

No sooner had the first Royalist horse been driven off that the second line, under the direct control if the somewhat excitable, Sir Edward Wadroy fell upon Holme’s regiment which was now extended by the Lobsters under Sir John Palgrave. Yet despite Royalist gallantry Wadroy’s horse was driven back and with it all hope on the Royalist right.

Now, with dusk fast approaching Sir John hoped that news from his right flank would be equally positive. Indeed the Royalist foot here were being badly handled by the Roundhead veterans, such that after a final discharge of muskets Francis Barns’ shotte fell upon the Royalist foot with clubbed musket and thus rolled up the enemy’s flank. However, while a portion broke and fled the second regiment stood firm resolute in their service.

Sir John it seemed had failed to destroy Lord Sutton’s army, though without doubt it had been badly mauled and would henceforth fall back to strengthen its ranks, the King’s plans in the north had been frustrated yet again.

So ended another enjoyable evening of DBR and illustrating for me at least the very best in a short evening of gaming.

"He either fears his fates too much, Or his deserts are small, Who dares not put it to the touch, To win or lose it all." - James Graham, 1st Marquess of Montrose. 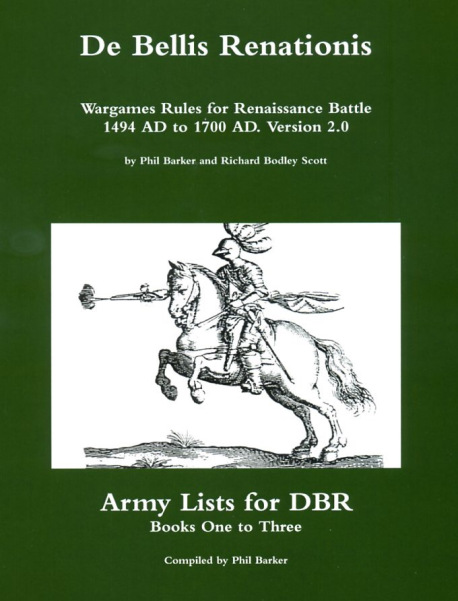